Your donation can provide a sustainable income for people who want to work their way out of poverty.

The hive which is being manufactured by Hives Save Lives in Uganda was designed by Oliver Field, author of ‘Honey by the Ton’.

Buy Honey By The Ton from the Amazon website and earn money for Hives Save Lives – Africa.

About Oliver Field
Mr Field has over twenty years of experience as a consultant on development projects in Africa and Asia involving apiculture and the honey industry, including beekeeping and queen rearing, honey production, preparation and running of training courses both in the UK and overseas, beeswax production and producing cosmetics from beeswax. He has also been a successful commercial beekeeper in the south of England for over 30 years.

The case for a modern hive in Africa
The need for a different approach to hive design in some parts of Africa is best summed up by Oliver himself: 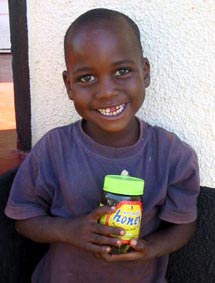 The honey produced by the African bee is just as good as honey from any other part of the world. The only difference is how it is produced and the quality of that honey. The reason for some of the poor quality is that almost all the honey is taken in a wild comb form and pressed from the combs. The resulting product is often full of impurities, such as excess pollen, dead bees and old comb.

To take a huge step forward, we have to use a modern hive for the production of honey. We have to leave behind the smoking out and hand pressing of the honey and change to a movable type of frame which will allow for the centrifugal extraction of the honey. This honey will now be marketable in any part of the world.

This will be done by the use of what I would like to call the ‘long Langstroth’ Hive. This hive will have sixteen langstroth frames in a horizontal plane, and will have no supers in the vertical plane (as in a European hive). The excluder needed to keep the Queen away from the honey combs will be introduced vertically and not horizontally. The point here is that the African bee needs to keep cool so the Queen will expand her brood nest outwards, whereas the European bee needs to keep warm and these bees will build a brood nest in a vertical direction.

For many years this fundamental truth was poorly understood, and a great deal of African Aid Funding was put into European hives, which did not serve the purpose of the African Bee. If we can harness the African Bee properly, its production of honey will be greatly increased and the quality of that honey, once it has been centrifugally extracted, will be much greater and so the earning powere of each hive unit will be increased. Not only this, but the hives will become far more manageable. Increase will cease to be by unmanageable swarming when too often that swarm is lost, but by manageable increase. This will mean increasing the number of hives by splitting colonies and not losing the stock by unexpected swarming.

So we will achieve a greater control of the bees and the honey. We will also be able to see which hives will need food to take them through long dry spells and losses through starvation or absonding will be limited to a minimum.

The African bee is a truly wild creature and does not have the disease problems of the interbred European strains used throughout most of the world. For this reason, the use of antibiotics will not be necessary and the honey will be far more acceptable when it is produced in a cleaner and more manageable fashion. In fact, I think that African honey could become a leading organic brand once the producton problems are put right.